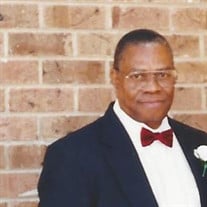 Roosevelt &#8220;Lank&#8221; Ellington Jr., age 79 of 313 Walker Road passed Wednesday December 16, 2020 at the Rainey Hospice House of the Upstate. He was born in Anderson County and was the son of the late Roosevelt Ellington Sr., and Faustina... View Obituary & Service Information

The family of Mr. Roosevelt Ellington Jr. created this Life Tributes page to make it easy to share your memories.

Send flowers to the Ellington family.