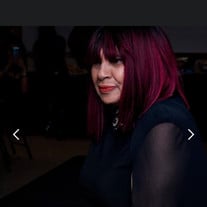 Parnese Plumer Goss-Ross known as, Pam, was a very devoted and dedicated wife to Stanley E. Ross of Washington DC. Pam earned her wings on November 27th 2020 at Capitol Caring Hospice. Born October 14, 1949 in Anderson South Carolina, she was the daughter of the late Paris and Christine Plumer. There were 8 children all together, Bessie Jean Antrum, Timothy Plumer, Ruth Hunter, Ruby Smith, Genève Stembridge, Geraldine Plumer , Walter Plumer, known as’( Coopie). At the tender age of 12, she lost both her parents. Her sisters stepped in to help raise her. She accepted Christ and joined, Pleasant Grove Baptist Church. After High school she married her high school sweetheart, James Benson Goss, and had 3 beautiful children, Mario Goss, Ilkra Goss, & Leopold Goss. Pam decided that she wanted more for her children, so she decided to move to Washington DC, where she found a school that taught her the necessary skills she needed to succeed in life. After graduating, she, later, landed a job with the Department of Education and moved on to the Department of Energy. She met the Love of her life, Stanley E. Ross She was the matriarch of our family. She was selfless, smart, intelligent, fashionable, talented, strong, brave and wise. She was like finding a light at the end of a dark tunnel. She leaves to cherish and honour her memory , a loving, strong, loyal and devoted husband, Stanley E. Ross, (2) sons, Mario T. Goss (Giselle) and Leopold S. Goss. Her one, and, only daughter, Ilkra la’Quane Goss “aka Tinkey. Three Sisters, Bessie Antrum (Charlie), Ruth Hunter (Charlie), Genevie Stembridge. One brother, Walter Plumer, (Naomi). (2) Grandchildren, Diamin Blango (Meech). Joshua E’Lias Goss. (2) Great grands, Marlei and, Deleon’. A host of nieces, nephews, cousins, and other lifelong friends and relatives.

The family of Parnese Plumer Goss Ross created this Life Tributes page to make it easy to share your memories.

Parnese Plumer Goss-Ross known as, Pam, was a very devoted and...

Send flowers to the Ross family.