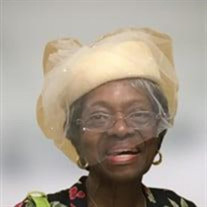 Jerelene Smith,age 77 passed Thursday October 21, 2011. She was the first born daughter of the late Charles W. Pearson and Elizabeth Wade was born on November 18, 1943 in Charlotte, NC and departed this life at Covenant Living Senior facility on Thursday, October, 21, 2021. Jerelene was a lover of people and had a never yielding spirit to help those in need. With encouragement, advice, money, food, love and compassion, she let her light shine around the world, and was a stranger to no one, and a mother to all. Her family moved her to Inkster, Michigan at an early age and she attended the Detroit Public school system. She accepted Christ as her savior at an early age and lived her life in Michigan, South Carolina, and Georgia. She was adamant in serving the Lord wherever he took her. She was active in the usher board, loved singing in the choir, and serving where the need was greatest. She started employment as a waitress at Kelly's Korner and found her lifelong career at Ford Motor Company at the Wayne Assembly Plant. She was there for 26 years and retired to McDonough Georgia where she joined the McDonough Senior community and became an active "Red Hatter." Jerelene gave birth to four children and taught them to be self-sustaining and strived to see them lead productive progressive lives. She valued family, friends and travelling the world. She leaves to cherish her memories: . Brother - Boyce Pearson (Ester), Sister - Barbara Tolbert, and preceded in death by her sister Glady's Miller-Coleman. Children: Daughter - Yolanda Constance Mallett (Everette), Crystal Lee Bell (Arnold), Carl Edward Smith III (Irene) and preceded in death by her daughter Sheila Marie Payne. Grand Children: Kenneth Peterson (Deceased), Shea Gary, Gerica Bree Bell (Neal), Umeka Clark, Tiara Bell, Tia Searcy, Jaden Smith, Daija Bell, and Kaiyah Smith Great Grand Children: Javon Williams, Rashaad Williams, Jimmy Bell, Crysta' Rae Brown, Julius Pitt-Bowles, Jillian Pitt-Bowles, Jadaya Brown, Wynter Thompson, and Jaxon Thompson and a host of nieces and nephews. Funeral services will be held Saturday at 11:00A.M. at Holloway's Funeral Home Chapel burial will follow at Mt. Zion Cemetery in Due West S.C. Public viewing will be held Friday from 12:00-6:00 P.M. at the Funeral Home.

Jerelene Smith,age 77 passed Thursday October 21, 2011. She was the first born daughter of the late Charles W. Pearson and Elizabeth Wade was born on November 18, 1943 in Charlotte, NC and departed this life at Covenant Living Senior facility... View Obituary & Service Information

The family of Jerelene Smith created this Life Tributes page to make it easy to share your memories.

Send flowers to the Smith family.