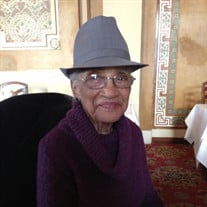 Gladys Rucker Mattison age 104 of Alamogordo, New Mexico, died April 6, 2020. Born December 29, 1915 in Anderson County South Carolina, she was the sixth daughter and tenth child of John Napoleon and Mattie Riley Rucker. She was educated in the South Carolina school system and joined the Mt. Moriah Baptist in Starr, South Carolina, at an early age. In 1935, Gladys married her childhood sweetheart, James Wilmer (J.W.) Mattison. Four children were born to this union: Herbert, John, Francenia and Harold. She joined the Mt. Zion Baptist Church in Belton, South Carolina, where she was a Sunday School Teacher, member of the Missionary Society and a choir member. Gladys was active in the community. She was a Den Mother, member of the Home Demonstration Organization (later renamed The Home Economic Council) which she joined in 1935. It was an outreached that encouraged healthy cooking, gave sewing lessons and tips on maintaining good health; and worked with the Meals on Wheel program and the PTA. Gladys became an officer in many of the organizations she joined. Gladys completed a correspondence dress and drafting course from the National School of Design in Chicago, Illinois. After earning her degree, Gladys began a sewing business that she had for more then 45 years. In addition to sewing clothes, sometimes from a picture, she also did upholstery, knitting, crocheting and other crafts. Gladys taught others to sew, displaying patience with new learners even as she sought perfection and required items to be redone until they meet her satisfaction. Upon J.W.'s retirement from Blair Mills, Gladys and J. W. moved to Alamogordo, New Mexico, where she continued her involvement in church and community. Gladys and J. W. joined the Calvary Baptist Church, where she taught Sunday School and sang in the choir. She took multiple Church Study Courses and received a Media Services Diploma. She was a leader of the prayer partners of her church. In addition, she used her crafting skills to crochet hats and blankets for newborn babies. Her civic activities included chairmanship of the Otero County Council Home Arts Show; a lifetime membership of the Alamo Doce Extension Club, which is part of the Extension Association of New Mexico, and contributor to the Smithsonian Institute Cultural Festival. Gladys' service to the community was recognized with several awards including the Golden Award from the Alamogordo Chamber of Commerce; recipient Pioneer Award from the Doce FCE (Family and Community Education); and Otero Women's Hall of Fame inductee. Gladys was preceded in death by her parents, husband, son Herbert Wendell Mattison, seven brothers and six sisters. Gladys will be remembered as a woman who lived by her faith and who was exuberant, inspirational, caring, kind (Proverbs 16:24 Pleasant words are a honeycomb, sweet to the soul and healing to the bones),humorous and loving. She stayed in touch through birthday and holiday cards in which she would write a message and reference scripture, and through regular phone calls. She is survived by her sons: John and Harold Mattison of Alamogordo, New Mexico; daughter Francenia(Earl) of Washington, D.C.; Grandchildren Cindy, Isabelle, Reginald (Melissa) and Brian Mattison, Melissa and Allison Thompson, Cassandra Johnson and Latrina Prince; 10 great-grand children; two great-great-grandchildren; one daughter-in-law; one aunt; one sister-in-law, and a host of relatives and friends. Due to the pandemic, a celebration of Gladys' life will be held at a later date. Memorial Graveside services will be held Saturday 1:00P.M. at Mt. Zion Baptist Church in Belton S.C. Services have been entrusted to the Holloway Funeral Home.

The family of Gladys Rucker Mattison created this Life Tributes page to make it easy to share your memories.

Send flowers to the Mattison family.