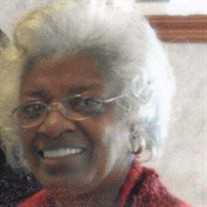 Carolyn Elaine Dotson Little age 73 passed Thursday at the Prisma Health Memorial Hospital. She was born in Anderson County and was the daughter of the late Marcus Dotson and Callie Mae Henry Dotson. She was a graduate of Geer Gantt High School,... View Obituary & Service Information

The family of Mrs. Carolyn Elaine Dotson Little created this Life Tributes page to make it easy to share your memories.