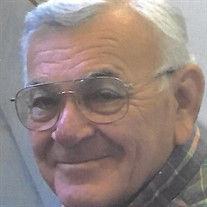 ADRIAN RAMOS age 82 of Anderson passed Sept 25, 2021 at Richard Campbell Nursing Home. He was born in Sebastian, Puerto Rico July 24, 1939. He was preceded in death by his parents, Adrian and Aurora Roman Ramos, his brother, Arnold and his sister, Carmen. He is survived by sons, David (Blondie) Ramos of Stony Brook, NY and Gerold Ramos of Berlin, Germany; daughter, Carmen Nora (Frank) Knolle of Germany; brothers, Edwin Ramos of New Jersey and Gilbert (Jackie) Ramos of Florence, SC; sister, Migdalia of Kentucky; eight grandchildren and 13 great grandchildren. Adrian resided in the Florence County area for many years before he moved to Simpsonville, SC. A veteran of the U.S. Army stationed in Crailsheim, Germany, he became a resident of the Richard M. Campbell Veterans Nursing Home in Anderson, SC on April 10, 2019. Adrian, also affectionately known as “Gino” or “Uncle Gino”, was fluent in English, Spanish and German, loved to help his friends and neighbors as he was a “jack-of-all-trades”. He will be well remembered for the joy he brought into the lives of his friends and the Lawrence family who “adopted” him, his great sense of humor and infectious laughter especially when he laughed at himself, his knowledge of the Bible, love of Christian music and Cielito Lindo, love of the Lord and his amazing photography. He knew what to focus on, how to make the photos come alive as he gave them heart and soul. To know Adrian, before and after the dementia began to steal his memory, was to love him. For their love and care, a special thanks to the nurses, CNAs and his Activities Director Loretta of the Richard M. Campbell Veterans Nursing Home, to his devoted best friend Rachel Lawrence Bline (deceased), friends Rick Henderson and Jane Lawrence. A military service, will be held Tuesday Oct 5, 2021 1:00P.M. at M.J. Dolly Cooper Veteran Cemetery officiated by Chaplain Michael Linkins of the Patriot Hospice & Palliative Care, Patriot Partners of the Upstate and the Honor Guard from Post 0184 of Richard M. Campbell Veterans Nursing Home. In memory of Adrian, you may contribute to the Alzheimer’s Association or to any needy veteran in the Richard M. Campbell Veterans Nursing Home, 4805 Belton Highway, Anderson SC 29621 (a fund is set up for this purpose).

ADRIAN RAMOS age 82 of Anderson passed Sept 25, 2021 at Richard Campbell Nursing Home. He was born in Sebastian, Puerto Rico July 24, 1939. He was preceded in death by his parents, Adrian and Aurora Roman Ramos, his brother, Arnold and his... View Obituary & Service Information

The family of Adrian Ramos created this Life Tributes page to make it easy to share your memories.

Send flowers to the Ramos family.